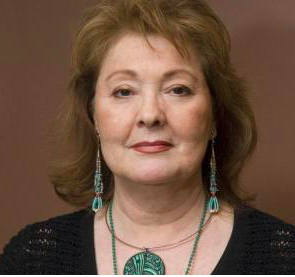 Official formal obituary for Tonya Gonnella Frichner, from her family and loved ones

Ms. Gonnella Frichner was a lawyer, activist and professor of American Indian history and law, Federal Indian Law, and anthropology and human rights for over twenty years. Ms. Gonnella Frichner taught at the City College of the City University of New York (CUNY) and Manhattanville College for eight years, as well as CUNY Hunter College and New York University. Ms. Gonnella Frichner also served as an Associate Member of Columbia’s University Seminar on Indigenous Studies.
Ms. Gonnella Frichner, worked closely with global Indigenous leadership, as well as the Onondaga Nation and the Haudenosaunee. She devoted her life to the pursuing of the right to self-determination, sovereignty, treaty rights, and individual and collective rights for Indigenous Peoples.
Ms. Gonnella Frichner was appointed as the North American Regional Representative for a three year term from 2008-2010, to the United Nations Permanent Forum on Indigenous Issues (UNPFII), by the President of the United Nations Economic and Social Council (ECOSOC), an advisory body to the ECOSOC. In that position, her mandates included: human rights, economic and social development, environment, health, education and media. Ms. Gonnella Frichner was nominated by Indigenous Nations, Peoples and Non-Governmental Organizations to the position for her work in the international arena. During that time, Ms. Gonnella Frichner served as Vice-Chairperson as well as the Special Rapporteur for the “Preliminary study of the impact on indigenous peoples of the international legal construct known as the Doctrine of Discovery,” (E/C.19/2010/13), submitted to the UNPFII, Ninth Session, 2010.

She has served as an active participant and legal and diplomatic counsel to Indigenous delegations in virtually all United Nations international fora affecting Indigenous Peoples especially during the drafting, negotiations and passage of the United Nations Declaration on the Rights of Indigenous Peoples (UNDRIP), overwhelmingly adopted in December 2007 (A/RES/61/295) by the UN General Assembly. The United Nations Declaration on the Rights of Indigenous Peoples (UNDRIP) sets the minimum standard for the survival, dignity and individual and collective rights of Indigenous Peoples globally.
Ms. Gonnella Frichner has received many distinguished awards for her service. Most recently, she received the Drums Along the Hudson award in June 2014, shared with the Honorable David N. Dinkins, the 106th Mayor of New York City. Other awards include the Harriet Tubman Humanitarian Award, the Thunderbird Indian of the Year Award, the Ellis Island Congressional Medal of Honor, the American Indian Community House International Service Award, the SilverCloud Singer Outstanding Service Award for advancing Indigenous Youth, the Ms. Foundation Female Role Model of the Year, which was shared with author J.K. Rowlings and others, The Mosaic Council, Inc. Visionary Award for Marking a Difference, which was shared with entertainer Queen Latifah, the New York County Lawyers Association Award for Outstanding Public Service, the Ingrid Washinawatok El-Issa O’Peqtaw Metaehmoh – Flying Eagle Woman Fund for Peace, Justice, and Sovereignty Award, the Iroquois Nationals Lacrosse Team Recognition, a City of Philadelphia proclamation in honor of United Nations Day and Ms. Gonnella Frichner’s work to “promote the rights for native people around the world,” recognition from the Temple of Understanding, recognition from the Beacon Two Row Wampum Festival, and the Alston Bannerman Fellowship.
Ms. Gonnella Frichner co-founded the Global Indigenous Women’s Caucus, together with Ms. Tia Oros Peters (Zuni), Executive Director of the Seventh Generation Fund for Indigenous Peoples, and Ms. Esmeralda Brown, President of the Southern Diaspora Research and Development Center.

Ms. Gonnella Frichner served on several boards of directors including serving as the Chairperson of the Seventh Generation Fund for Indigenous Peoples, the City University of New York School of Law Board of Visitors, the Interfaith Center of New York, the Connie Hogarth Center for Social Action, the Seven Eagles Corporation, the Flying Eagle Women Fund for Peace, Justice and Sovereignty, the International Movement Against All Forms of Discrimination and Racism, the Boarding School Healing Project, and the Iroquois Nationals Lacrosse Team, the official national team of the Haudenosaunee since 1984. It is a Federation of International Lacrosse member nation and World Lacrosse Championship medalists. Ms. Gonnella Frichner authored a number of articles and papers on Indigenous Peoples and was working on two books, including an autobiography.
She earned a Bachelor of Science degree from St. John’s University of New York and graduated magna cum laude in 1980, she earned a Juris Doctor from the City University of New York School of Law in 1987 and a Doctor of Laws honoris causa from Colby College, Waterville in Maine in 2012.
In September 2014 United Nations Secretary General Ban Ki-moon quoted Ms. Gonnella Frichner in his remarks: “A longtime indigenous activist and former member of the Permanent Forum on Indigenous Issues, Tonya Gonnella Frichner, once said, “Indigenous peoples all speak many different languages but in our meetings, we are speaking one language. Our relationship to Mother Earth is identical.”