In the heart of Alberta, near Calgary you will find a small trading post called “Boy Chief Trading”. As many other business around the world, Boy Chief Trading had to close their shops when the pandemic started. In this article you will find the story behind their blankets, the history of Blackfoot Trading and how they are doing now.

Online shopping is on the rise. Excuse me, not on the rise, it is here. As local trading posts were ordered to close their shops in 2020 because of the pandemic e-commerce became one of the safest ways to trade. Amazon as the front runner we all know but the more interesting part of this change, are small businisses that struggeled to make end meet. Last time I presented three indigenous start ups that are continuing their businesses despite the pandemic (Indigene Start Ups in Zeiten von Corona). Today I would like to introduce another company that has made the leap.

Set at the trading post along Highway 901 about 55 kilometres east of Calgary. Boy Chief Trading is a company founded in 2017 by Darryl McDonald and Mona Royal.

Both, Darryl and Mona sell arts and crafts, created by local indigenous artists. You can find art, jewlery and many other things like blankets in their store. The geometric designs on the blankets made out of wool, are traditionally made to show historical or culturally significant events from indigenous history. The new collection of blankets at Boy Chief Trading is made to show the pioneering spirit of the Blackfoot people. The designs and colors want to reflect ancient traditions and are made to remember the great culture of Blackfoot. As so many indigenous people around the world, Boy Chief Trading wants to help in the continous fight to keep cultural diversity alive.

Darryl and Mona named their company after Boy Chief, to preserve the memory of their great grandfather. He was a true leader and a medicine man. 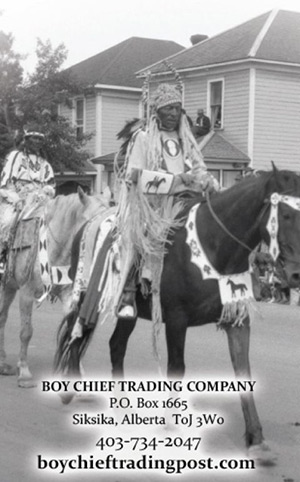 Boy Chief was the most photographed Blackfoot man in his era, a true ambassador of his time, and one of the most succesful businessmen around, as he owned the largest herd of horses in Southern Alberta. To honour Boy Chief, Boy Chief Trading has developed colours having to do with his culture, which include charcoal black, ochre red and buffalo grass green, to name a few. His stories and history is passed down with great honour.

Blankets bought at Boy Chief are not just any blankets, they are a piece of history. As they try to explain their concept, Darryl McDonald told in an interview to CTV news:

“What we‘re trying to do is, to restore our stories. And we want everybody to have a clear knowledge of them...“ 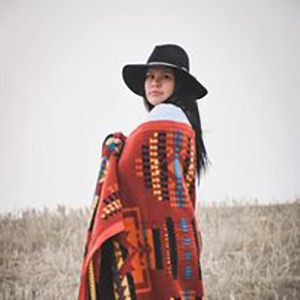 When you buy a blanket from Boy Chief and open your box, Boy Chief Trading wants to add a story to your purchase and you can find an additional picture in the package. Mona and Darryl want you to know, that what you are buying is a real story, made from family history.

And it shows! The work Mona und Darryl put in their business. The blankets are colourful and show the rich culture of Blackfoot and their history.

Kainai, Piikani and Siksika are three indigenous nations, referring to themselves as Blackfoot or Siksikaitsitapi. Blackfoot people call themseves Niitsitapi, which means “the real people”. The tradional area included parts of the North Saskatchewan River in Alberta to the Yellowstone River in the state of Montana. Their hunting area was the bison ranges of southern Alberta and northern Montana.

Here you can find a map, showing traditional Blackfoot territory 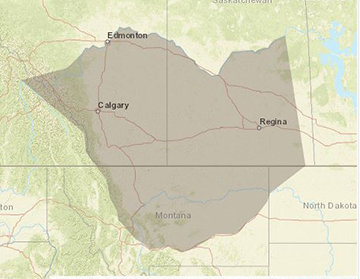 To the North were the North Blackfoot, who camped along the North Saskatchewan River. To the South were the South Blackfoot who protected lands as far South as the Missouri River. The Middle Blackfoot were responsible for all lands between the Rocky Mountains and the Cypress Hills.

Blackfoot people and the bison hunt

Traditional Blackfoot culture is based on the bison hunt. The bison was largly engaged in the way of living, diet and culture. As Mona Royal founder of Boy Chief Trading tells the story of her grandfather in one particular design. Her grandfather told her the tale of the near extinction of the Buffalo in their reserve.

Three men noticed, that sights of the Buffalo were getting rare. So they decided to go into the U.S., to the Falt Indian Reserve, near the Missouri River and buy three female and three male Buffalo. They took it upon themselve to bring the animals across to Alberta.

This blanket features three bisons, each representing one of three men who went south to make the purchase. Each bison has four dots representing the two breeding pairs they brought back to Canada. 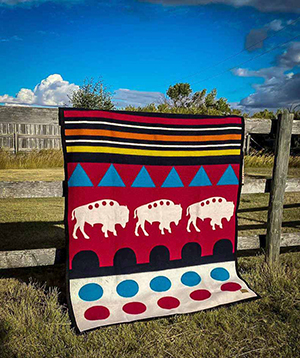 Online - Business despite of the pandemic

As the pandemic spread, large lockdowns were implemented worldwide and people weren‘t able to go to the store anymore. Businesses struggled, as did Boy Chief Trading but Mona and Darryl were able to make the transition from local store to online shopping and business started booming. Now they are shipping worldwide and selling blankets to Europe and the rest of the world, selling 30 to 40 boxes a day.

Petra Gröblinger, BA, she studied media and journalism at the University of Vienna. She is very interested in topics about equality and discrimination against minorities. The latter was the topic of her Bachelor thesies. She joined Working Circle Indians of North America (AKIN) in summer 2020 and wants to spread positivity. 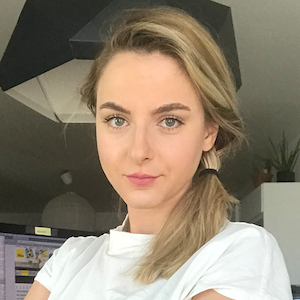